Akonadi Foundation announced this week that their new president will be longtime philanthropy leader and community advocate, Raymond Colmenar. In the new position, Ray will build upon the legacy of the foundation’s 20-plus years of work to eliminate structural racism in Oakland and beyond. Learn more at Akonadi.org and follow them on social media to see how Ray will take Akonadi into its next chapter.

Annie Lee of The Stop AAPI Hate Coalition, and Chinese For Affirmative Action’s policy director, went on KPFA’s Letters + Politics to talk about how AB 2448 and SB 1161 will combat anti-Asian racism and violence, and to lift up the voices and experiences of those who reported hate incidents via the coalition’s website.

Alicia Garza, founder and principal of the Black Futures Lab and Black to the Future Action Fund joined Joy on the ReidOut earlier this month, along with LaTosha Brown, co-founder of Black Voters Matter, to talk about how the economy—and economic issues like access to abortion—is top of mind for Black voters. This is according to findings from Black to the Future’s year long temperature check poll. You can read a transcript of the show here (19:44). And, Alicia joined Ayman Mohyeldin on MSNBC, urging media and the electorate to hold Donald Trump and his allies “accountable for all the laws they have broken … [and] all of the ways in which they essentially tried to dismantle the protections of the federal government to help serve their own political needs.” This in the wake of news that a former Trump attorney may have handled documents subpoenaed by the DOJ ahead of the Mar-a-Lago probe.

Launched by Black Futures Lab in 2018, the focus of the second Black Census, the largest survey of Black Americans in over 150 years, is on “telling new and different stories about who our communities are and what we want for our futures.” All throughout August, Black Futures Lab partnered with organizations across the U.S. to hold in-person events to encourage Black people to fill out the census so that policy and advocacy goals can be informed by a complete picture of Black issues. NewsOne. Essence. 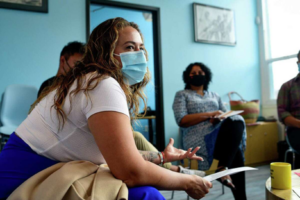 “A lot of us that have been doing this for a long time feel a responsibility to create sustainable paths to leadership for the next generation.” The San Francisco Chronicle spoke with movement leaders Marlene Sanchez, executive director of the Ella Baker Center, and Nicole Lee, executive director of the Urban Peace Movement, about the next generation of leaders coming up in the movement for racial and social justice in the Bay Area, and their hopes for the future. The Ella Baker Center recently launched “We Mentor Us”, which supports youth leaders to forge relationships with local and national organizations focused on social justice. According to data from Akonadi Foundation, there are more than 90 Black-led social and civil rights organizations in Oakland and dozens more led by Latino and Asian community leaders.

What we are listening to

Kyung Jin Lee, former journalist and one of Change Consulting’s earned media leads, advised on this episode of NPR’s podcast Throughline about how — out of war, occupation, economic crisis, and national strategy — South Korea became a major global exporter of pop culture and entertainment.

Each week, we will bring you tips, tricks and thoughts from our Strategy Team whose work lays the foundation for successful communications.

From Kay, a Director on our Strategy Team: “We are currently supporting our client The San Francisco Foundation and their Regional Recovery Community Advisory Committee by developing a messaging guide and engagement plan that will help Bay Area advocates ensure budget decisions not only provide immediate relief, but win targeted, long-term investments for communities who need it the most. We are inspired by creative tactics to hold decision makers accountable like this billboard in Los Angeles. By shifting the narrative from one of recovery to resilience, we can ensure everyone in the Bay Area can live with dignity and abundance.”

From Dina Sigal, another Strategy Director: “At Change Consulting, we start every project by listening deeply and immersing ourselves in the context of our clients with the ultimate goal of coming up with the most effective, creative, and actionable communications strategies and tactics. We call this our Insights Phase. This month, our team gathered to discuss what our ‘Change-ology’ looks like in this phase and how to encourage more cross-team collaboration. One key reflection is that we always meet clients and stakeholders where they are and adjust our process and deliverables to fit their communications needs and goals.”