Young Women’s Freedom Center announced this week an exciting leadership transition: current Deputy Director Abigail Richards and Managing Director Julia Arroyo will become the organization’s Co-Executive Directors, assuming their shared roles on September 1, 2022. And, after a six-year tenure as Executive Director, Jessica Nowlan will transition to leading and developing the ecosystem of initiatives and efforts needed to realize the Freedom Charter, a set of liberatory principles that aim to guide the movement to end mass incarceration and criminalization of children, families and communities. More information about the transition on Young Women’s Freedom Center website and click here to RSVP for their transition party coming up on September 22.

Alicia Garza, founder and principal of the Black Futures Lab and Black to the Future Action Fund, joined Tiffany Cross on MSNBC to talk about priorities for Black people across the U.S., according to data gathered by Black to the Future Action Fund’s temp check polls. The answer? The economy, white supremacy and access to the polls. “Black voters want to make sure they have access and the ability to weigh in on the decisions that impact our lives every single day.” View the entire segment here.

The Black Futures Lab is hoping to engage more than 20,000 respondents for this year’s Black Census, the largest survey of Black people in the U.S. in more than 150 years. To help reach that number, Black Futures Lab and partners will host a series of “family reunions” to engage Black communities for Black Census month. “This is an effort to bring us together in unity, to really make sure that we establish August as a time when our families get back together to make a plan for how it is that we’re going to impact politics so we can be powerful in it.” Ebony.

“This survey, informed by those with lived experience, will help officials capture a deeper understanding of street harassment, a currently invisible yet pervasive problem in our transit systems. This is essentially why we started Stop AAPI Hate — to name a problem we know to be true but not widely discussed.” Stop AAPI Hate, founded by Cynthia Choi, who wrote this piece for the San Francisco Chronicle and is the co-executive director of Chinese for Affirmative Action, on how gathering data on street harassment within transit agencies can inform strategies to increase rider safety. San Francisco Chronicle.

“Institutional philanthropy has a particular responsibility to contribute to the healing of the lands they occupy and enter into a restorative relationship with the communities who have been most harmed.” An upcoming event will focus on the growing movement of foundations to redistribute their wealth and support the return of indigenous land. In addition to Hidden Leaf Executive Director Supriya Pillai and Board Treasurer Tara Brown, the second installment of the “Giving Shuumi” series, hosted by Justice Funders in partnership with Sogorea Te’ Land Trust, will include Corrina Gould of Sogorea Te’ and Pia Infante, of the The Whitman Institute. Click here for more information on philanthropic efforts so far and RSVP here for Giving Shuumi Part 2: Exploring the Extractive Origins of Philanthropic Wealth and Moving Towards Repair.

“In addition to de-naturalizing the current dominant narrative, it is important to make alternative social systems appear visible and real.” We are reading this essay on how the theory of system justification explains why narrative change, including for social change that benefits them, is so hard to achieve even among those disadvantaged by skewed systems. SSIR. 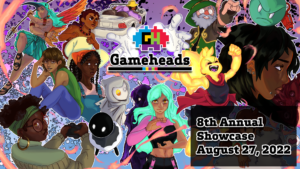 Tomorrow, Gameheads will host a block party to celebrate the 8th Annual Student Showcase at their new home: Oakland’s first Video Game Center. The event will include music from Mani Draper and Bay Area rapper and producer Push Kahlon, a VIP lounge and, of course, the totally unique, hella fun games that Gameheads students designed in the summer program.

It’s not too late to RSVP! Secure your spot today: bit.ly/3dmT3IJ