Civic participation goes beyond voting, especially when addressing social and racial justice issues. Even though the storm surrounding the California recall has calmed down, community-based organizations are planning ahead to increase civic participation among voters of color and young voters. Community groups continue to advocate for policy changes in criminal justice reform, health equity, housing affordability and other critical issues affecting communities of color. Investing resources and funding grassroots organizations resulted in effective voter outreach campaigns Contrary to popular belief, young voters also showed up to spread the word on the importance of beating the recall. The recall victory highlights the power of voters of color and we need to keep that momentum going as we look ahead of the 2022 midterm elections.

A new report Mismatched revealed that only 6% of philanthropic dollars support racial equity work. The striking report published by the Philanthropic Initiative for Racial Equity provides recommendations that correct the distorted image of philanthropy and its response to racial equity over the past 10 years. Our friends at the AAPI Civic Engagement Fund were spotlighted on page 57 of the report for their commitment to civic engagement among Asian Americans and Pacific Islanders nationwide. The Fund has awarded grants to more than 30 AAPI organizations addressing current and emerging issues in their respective communities. 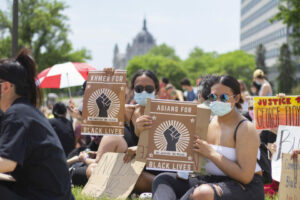 Our partners at the Black Girl Freedom Fund (BGFF) got a shoutout in the New York Times for their commitment to gender and racial equity in the philanthropy sector. Prominent philanthropists MacKenzie Scott and Melinda French Gates partnered with Schusterman Family Philanthropies to organizations that focused on gender equity. Their contributions set the pace for ‘Breaking Up the Philanthropy ‘Boys Club’ which is often white and male-dominated. Our partners at BGFF are working to raise $1 billion over the next 10 years. 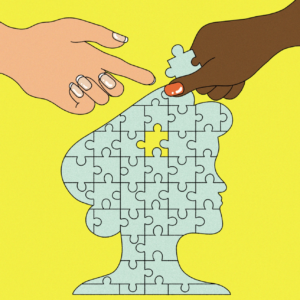 The chief executive officer of Grantmakers for Girls of Color Dr. Monique Morris spoke with podcast host Melissa Harris Perry of The Takeaway on the importance of mentorship for black girls. The two ladies discussed the different ways mentorship can empower black girls to succeed as individuals and in their respective communities. The full podcast episode is available online. Morris will also appear on  MSNBC’s American Voices on Saturday, October 2 at 7:45 p.m. ET  with news anchor Alicia Menendez. 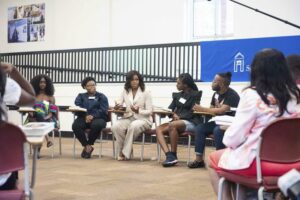 Michelle Obama speaks with students of Morehouse College and Spelman College during a campus visit to Spelman College on Saturday, May 11, 2019, in Atlanta. Photo credit Paul R. Giunta, Associated Press

Voter engagement among youth voters is often painted as a major hurdle for electoral campaigns runners. There is much discussion about whether young voters will show up to the voting polls for Democrats in the upcoming 2022 midterm elections. However, young advocates are shifting the narrative and pushing for policy changes that affect young people nationwide. Current and emerging issues such as racial justice, gun safety, and climate change have inspired a new wave of young community organizers in California. Power CA spoke to the Los Angeles Times on the growing awareness and civic engagement among young voters in the state. 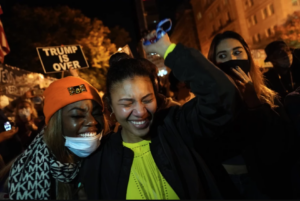 In the newsletter RaceAhead for Fortune Magazine, journalist Ellen McGirt wrote on the recent conviction of the Grammy award-winning musician R Kelly for sexually assaulting 48 girls. The federal case, which includes 22 Jane and John Does, was 30 years long overdue. McGirt states that the musician’s entire career operated like a “criminal enterprise, emboldened by a world who treats the bodies, lives, spirits, and futures of Black girls, women, and boys with contempt.” The artist was convicted for 14 charges, including kidnapping, bribery, and sex trafficking. He also faces eight additional federal charges under the Man Act. Kelly’s conviction is a cultural reckoning that exposes how the exploitation of Black and Brown girls is often ignored.