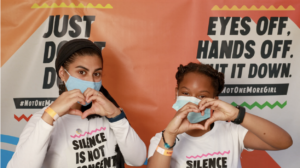 “This is just the start of our work to reimagine safety for our community. As young people, Not One More Girl has given us hope that change is possible, and it will happen while we are young.” Last month, the Alliance for Girls, Betti Ono, Black Girls Brilliance, The Unity Council and BART announced the launch of the Not One More Girl campaign, BART’s first ever sexual harassment prevention campaign driven by the experiences of local girls and gender expansive youth on BART.

Youth researchers and campaign participants Uche Esomonu Riss Myung wrote a piece about how the campaign came to be for Teen Vogue. Learn more about the campaign at bart.gov/notonemoregirl and follow along on social media using the hashtag #NotOneMoreGirl to hear more about their visions of safety on public transportation.

The #Food4All Bill would modernize the California Food Assistance Program to include all Californians who might be ineligible for the program because of their immigration status. AB 464 is being considered by the California State Senate now. For more information and how to take action on this important issue, visit nourishca.org. CalMatters. Public News Service.

The Anti-Racism and Intersectional Justice Fund, established by the AAPI Civic Engagement Fund, and Grantmakers for Girls of Color will receive support from the Chan Zuckerberg Initiative (CZI) as part of a five-year, $500 million investment that supports organizations leading the way to advance racial equity, diversity, and inclusion. Grant recipients are led by, or work in support of, communities of color and focus on cultivating leaders, tackling outcome disparities, shaping policies, and advancing institutional change. More information at chanzuckerberg.com.

“It’s disingenuous to look at that poll and work the Reimagining Public Safety Task Force has done and say Oaklanders want more police in their community.” Sikander Iqbal, deputy director of the Urban Peace Movement (UPM), spoke with Darwin BondGraham of Oaklandside about Mayor Libby Schaaf’s proposed budget which increases police spending based on data from a poll of Oaklanders conducted in February. UPM’s own survey, conducted in February as well with 241 Black men who live in Oakland, showed that respondents actually feel less safe around police and that good paying jobs, affordable housing and other services and opportunities would make them feel safer, contradicting the City’s data. Oaklandside.