This week, Black to the Future Action Fund unveiled findings from its year-long Temperature Check Polls, the largest recurring survey of approximately 6,000 Black adults in the United States, conducted bimonthly from July 2021 to May 2022. For the first time, politicians and policymakers heading into midterm elections have a year’s worth of data supplied by one of the country’s most powerful voting blocks, Black communities. The polls show that as economic conditions for Black families and communities continue to worsen, without any signs of recovery, approval ratings for elected leaders have been steadily declining. 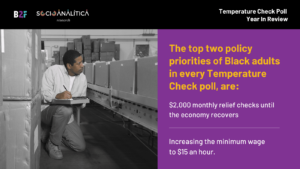 The data also shows that Black voters are ready to support Democratic party leaders if they act with urgency on bold policies. Mondale Robinson, founder of the Black Male Voter Project, called on Democrats to engage with Black communities year-round, not just during election season: “You can’t show up two months before the election with the proverbial fried chicken or church fan, telling Black people this is the most important election and this is the most important candidate.” USA Today. The Grio. The Hill. Politico. Roland Martin

Supriya Lopez Pillai, executive director, and Tara Brown, former Executive Director and family board member of the Hidden Leaf Foundation reflected on recent changes to their grantmaking reflective of the deeply challenging time facing their grantee partners — namely, increasing funding overall and extending partnerships over five years to ensure long-term support — and the discomfort of evolving to better serve their communities in a recent newsletter.

State Senator Dave Min took to CalMatters to advocate for The Improving Public Transit Ridership Safety bill, which will protect women, transgender individuals and other vulnerable public transit riders by requiring California’s 10 largest transit agencies to recognize street harassment as a rider safety concern, gather data and create solutions that don’t include prison or jail time. The Bill is inspired and sponsored by Stop AAPI Hate and data they gathered on street harassment of Asian American Pacific Islanders in particular. CalMatters.

Serving on a corporate board is a good gig, but the number of Indigenous people who hold board seats is far less than one-tenth of 1 percent. According to Carla Fredericks, CEO of The Christensen Fund, intentionally recruiting Indigenous people to board seats is critical to successfully transforming organizations. “You kind of have to peel back the onion really, and try to understand, it’s not just who’s on the board, but who’s really engaged? And in what way, and what committee are they in charge of?” Indian Country Today.

We are revisiting Rise-Home Stories Project, a first-of-its-kind collaboration between longtime organizers, advocates, writers, filmmakers, journalists, game designers, and more to reimagine the past, present, and future of our communities, developing five multimedia projects promoting a just and inclusive vision of homes and communities. The folks behind this project inspire us and demonstrate the power of storytelling to transform narratives about housing, land, and race. Learn more about this important work at https://risehomestories.com.