With the recall of California Governor Gavin Newsom less than a month away, the Governor’s campaign is on track to “blow it in the final stretch” by failing to engage with the most critical segment of the California electorate: voters of color. Ludovic Blain, Executive Director of the California Donor Table, argues that “California actually does have what it takes for Democrats and progressives to win”:  regional groups like Million Voters Project Action Fund,  Alliance San Diego, Inland Empire United, Orange County Civic Engagement Table Action, Communities for a New California, and Lift Up Contra Costa Action, organizations with expertise in direct contact with voters of color. Democracy in Color.

Ludovic also recently joined Marisa Lagos and Scott Schafer on KQED’s Political Breakdown to talk about what’s missing in the message and strategy of Newsom’s campaign to defeat the recall, and the California law that is shrinking the electorate in local races. Listen to the full episode at KQED.org. 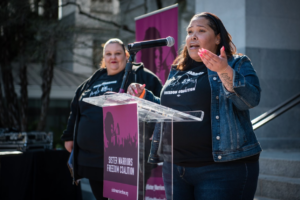 “AB 124 does not absolve anyone of responsibility or accountability; it creates more meaningful pathways toward justice.” Young Women’s Freedom Center Policy Associate April Grayson penned a powerful piece on how AB 124, the Justice for Survivors Act, would help put an end to the criminalization of survivors of human trafficking, intimate partner violence, sexual violence and more trauma who are caught up in the criminal justice system. CalMatters.

Alameda, Contra Costa, San Francisco, Santa Clara and Solano counties recently partnered with the Perinatal Equity Initiative to launch #DeliverBirthJustice, a “campaign to tackle the underlying racism that they say lead to the disproportionate death rates of Black women and infants as compared to other racial groups.” More information about the campaign is available online at deliverbirthjustice.org. Sacramento Observer. 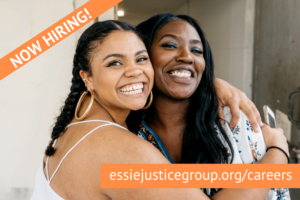 Essie Justice Group is hiring! Working at Essie means joining a group of colleagues who are committed to creating a work environment that reflects Black Feminist abolitionist values and politic. If you or someone you know is looking for a highly collaborative, strategic workplace where your leadership and skills will be utilized to the fullest, visit essiejusticegroup.org/careers. People with incarcerated loved ones, people who are formerly incarcerated, people of color, queer people, and people who are trans, gender expansive, or gender nonconforming are strongly encouraged to apply.

Here’s how you can support ACA 3: 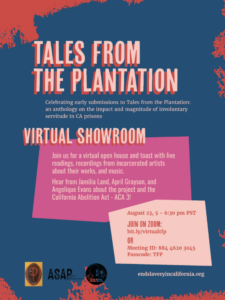 As part of their work with the California Abolition Act Coalition, the Young Women’s Freedom Center, along with other members of the coalition, will also launch “Tales from the Plantation” next week. The anthology of art and writings from incarcerated and formerly incarcerated people will highlight the impact and the magnitude of involuntary servitude in California prisons and lift up the urgency of ACA 3. You can check out the campaign at a Virtual Showroom August 23 at 5:00 p.m. PT. Join on Zoom at bit.ly/virtualtfp

In response to what Monique Morris, president and CEO of Grantmakers For Girls of Color (G4GC) calls the “ridiculous underinvestment in Indigenous girls,” G4GC partnered with Seventh Generation Fund for Indigenous Peoples to create the New Songs Rising Initiative. The new initiative seeks to “empower and uplift community-organized, grassroots, Indigenous-women-led and serving projects” according to Program Coordinator Alex Gonzales. Inside Philanthropy.

Michael Tubbs, former mayor of Stockton and the Rosenberg Foundation’s first ever Senior Fellow recently joined host John Kelly, editor of the Imprint, on the outlet’s weekly podcast to discuss universal basic income, how being mayor shaped his views on child welfare and juvenile justice, shifting the narrative on fighting poverty, and more. The Imprint.

What We Are Watching:

Double Fine Art Director and Gameheads Board Member Lisette Titre-Montgomery wants to see more women in the gaming space. CNN recently featured Lisette and her work with Gameheads to break down barriers for women in gaming in a video as part of their REPRESENTED series.

The Annual Gameheads Student Showcase is back! Check out the show online on August 28 to get a sneak peak at the unique and totally fun games from 12 student teams and help Gameheads celebrate the genius and creativity of the young people of color changing the tech and gaming industries. RSVP today to find out how to view this event: https://bit.ly/GH7thAnnualShowcase