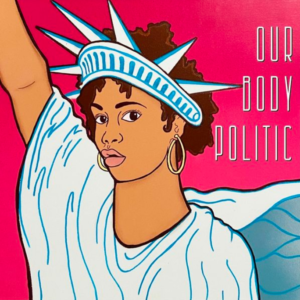 This week, host Farai Chideya spoke with EunSook Lee, director of the AAPI Civic Engagement Fund, about the growing political power of Asian-American women and how the AAPI CEF has politically organized Asian American and Pacific Islander communities across the U.S., for Our Body Politic. 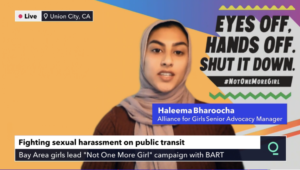 Haleema Bharoocha, Senior Advocacy Manage for Alliance for Girls, and Uche Esomonu, Youth Strategist for Not One More Girl were featured on Bloomberg Quicktake “Take A Break” to talk about the new campaign to combat sexual harassment and gender-based violence against girls on BART as a follow up to a feature on the campaign published on Bloomberg’s City Lab.

Haleema, joined by Citlalli Garcia Rodriguez, senior at Skyline High School in Oakland, and Anyka Barber,  founding director of Betti Ono Gallery, also spoke with host Ariana Proehl on KQED Forum to talk about the community led campaign. Not One More Girls is a partnership between Alliance for Girls, Betti Ono, Black Girls Brilliance, the Latinx Mentorship and Achievement Program for the Unity Council, and BART. KQED Forum. 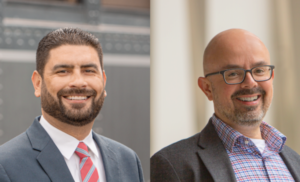 This week, the Evelyn and Walter Haas, Jr. Fund announced the appointment of two new Program Directors. In the new position of Democracy Program Director, Raúl Macías will lead the development and launch of strategies to achieve the Fund’s goal of building a fairer and more representative democracy in California. Dan Torres will lead the Fund’s immigration work with a focus on achieving safety, solidarity and dignity for young immigrants. Philanthropy News Digest, San Francisco Business Times.

Partnership for the Advancement of New Americans (PANA) released a survey this week, as they do every two years, of 544 refugees in San Diego to better understand the experiences, challenges, and needs of our communities. This year, the survey revealed the impacts that COVID-19 had on access to affordable housing, employment and more. According to PANA deputy director Homayra Yusufi, “COVID is just highlighting and making apparent the issues that we already knew existed.” Los Angeles Times.

“This growing movement reflects an understanding that real safety for students doesn’t come from school police. It comes from the community, with access to support services like counselors.” Black Organizing Project founding executive director Jackie Byers in a powerful commentary makes the case for police free schools in Oakland, across California and the U.S. CalMatters.

The Zellerbach Family Foundation announced this week that nominations for the annual William J. Zellerbach (WJZ) Award for Social Change are open. Now in its third year, the award recognizes one visionary Bay Area organization that is working to advance social justice and address the pressing needs faced by our communities. For more information and to nominate an organization, visit zff.org/wjz-award. 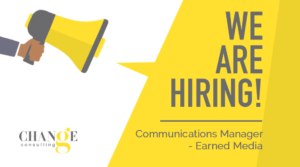 Are you passionate about communications and storytelling for racial and social justice? Change is looking for our next Communications Manager to support earned media projects. Join our Black-led, women-operated agency. For more information on how to apply, visit: https://change-llc.com/communications-manager-earned-media-specialist/