We want to take a moment to acknowledge and celebrate the record number of voters who turned out, the people of color who led groundbreaking get out the vote efforts, and many progressive wins across our state in addition to a hopeful outcome for our federal elections.

We are inspired by the show of force exhibited in this unprecedented election in an unprecedented year. Some models estimate that over 160 million people voted in the presidential election — almost two thirds of the voting age population in this country.

Moving forward, we know we have serious and urgent work to do to repair the harm of the past four years, and to ensure health, safety and wellbeing for all. It starts with raising our voices and making our demands for racial justice heard. It is our honor to continue this work with the changemakers who are leading the way to ensure justice for our communities. We celebrate the people who carried this moment, andare getting ready to get back out to support them.

On Thursday, November 5, AAPI Civic Engagement Fund and Asian American Decisions hosted a webinar to provide detailed poll findings and electoral context for Asian American voters nationally and in Georgia, Texas and Virginia. Two election eve polls conducted by the AAPI Civic Engagement Fund and Asian American Decisions show that the Asian American electorate has formed into a progressive voting bloc and could play a critical role in swinging GA-07 in suburban Atlanta. The webinar is available to watch here and more key findings on the American Election Eve Poll 2020 is available here. Poll results indicate that Asian Americans are critical to the rising progressive coalition of voters of color with more than two of three voting for Democratic candidates. Joe Biden’s selection of Kamala Harris as the first Black and Asian American candidate for Vice President, as well as Asian American voters’ assessment of Trump’s attitudes towards AAPI communities, impacted the bloc’s vote. Huffington Post. Wind Newspaper. AsAm News. Georgia Asian Times.

“It is time to pave a new path forward- towards a state that reflects not just our diversity but our values of equity and justice. Voters of color, young voters, and immigrant voters are the majority. Democracy can not work for us until it includes us.” Kevin Cosney of California Calls and Angelica Salas, director of CHIRLA, on their organizations’ work with the Million Voters Project. Capitol Weekly.

Ahead of the election, Lydia Aviles, associate director of organizing for California Calls and a field organizer for the Million Voters Project was featured on Radio Bilinguë to discuss their work to get out the Latinx vote across california. Radio Bilinguë (featured at 30 minutes).

“We are absolutely interested in winning elections, but we’re also interested in building longer term power… That requires a much deeper investment.” Amado Uno, director of Million Voters Project on why their efforts will extend beyond election day. Mic.

“Holly’s victory is a testament to the change that is possible in Los Angeles when we let the people lead… Black, Brown, AAPI and other working communities of color have been left out of the political conversation for too long. With this victory, we are just getting started in building a greater L.A. that serves all people, not just the privileged or powerful.” Tina McKinnor, civic engagement director for LA Voice Action on Holly Mitchell’s win in the race for Supervisor of LA County’s 2nd District. My News LA. 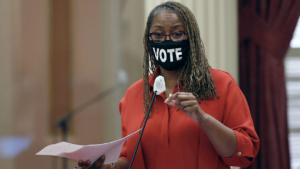 Another important victory in Los Angeles: George Gascon has won the election for Los Angeles County District Attorney against incumbent Jackie Lacey.  “With the biggest prosecutor office and the biggest jail system, there’s no wonder that this race has been called the most important DA race in the country. Going up against one of the most powerful police unions in the country was no small feat, but we knew that if the people had their say, they would vote for Gascon and usher in a new era of criminal justice reform in Los Angeles that would reverberate across the country.” Tina McKinnor, civic engagement director of LA Voice Action and co-leader of the Imagine Justice PAC on the critical win. MyNewsLA.com.