In California, 1 in 4 people experience food insecurity and don’t know if they will have something to eat the next day. CalFresh is a critical lifeline for people struggling to make ends meet; but many immigrants are explicitly and unjustly excluded. The Food4All campaign seeks to end the unjust immigrant exclusion in CalFresh by expanding eligibility in the California Food Assistance Program to all immigrants who can’t participate in CalFresh solely due to their immigration status. Univision 21.

“The country relies on California to ensure that Democrats have a majority in the Senate and in the House, but also they rely on us to send progressives amongst the Democrats to lead the fight. And each time we’re let down by a California Democrat, is a sad day, not just for us, but for the country and the world.” The California Donor Table (CDT) plans to invest $10 million on 2022 races to get progressive candidates elected to the Legislature and House, with a focus on candidates of color. CDT Executive Director Ludovic Blain joined the San Francisco Chronicle’s Joe Garofoli to talk about midterm plans on It’s All Political, the Chronicle’s politics podcast, also included in Joe’s column and  Politico’s CA Playbook.

“2020 was like a referendum on the racial division.” Extensive surveys conducted in multiple languages by  The AAPI Civic Engagement Fund in the 2020 election sought to fill a gap in research about Asian American and Pacific Islander communities’ political views. The data showed that AAPI communities largely trended blue, as EunSook Lee, director of AAPI Civic Engagement Fund, recently discussed with the LA Times.

Last week, L.A. County Supervisors took an important step towards banning exorbitant prices for phone calls and commissary items in county jails and juvenile detention centers. According to Angelique Evans, community organizer for the Young Women’s Freedom Center, “This is one of the best investments that L.A. County can make in the health, wealth and safety of low-income Black and brown communities. L.A. County should be negotiating harder for a better contract, instead of continuing to let greedy corporations exploit L.A. families for profits.” L.A. Progressive. 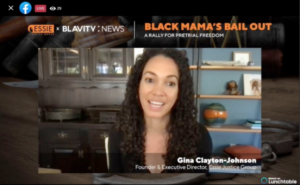 For the last five years, Essie Justice Group has joined Black-led organizations to bail out Black mothers in California to spend Mother’s Day at home with their loved ones where they belong. This year, in addition to bailing out Black mothers unable to afford the bail amounts set for them, Essie held a virtual day of action to call on California judges to follow a recent and historic state supreme court ruling on bail. Since 2017, more than 500 Black mothers and caregivers have been released from jail, due to the efforts of the Black Mama’s Bail Out initiative. Good Morning America. Sacramento Bee. LA Sentinel. My News LA.