Earlier in 2021, the Young Women’s Freedom Center released Through Their Eyes: Stories of Reflection, Resistance, and Resilience on Juvenile Incarceration, an unflinching examination of the experiences of 51 system-impacted cis and trans young women, trans men and young men, and gender-expansive youth incarcerated and surveilled in the juvenile delinquency system, and by the probation department in San Francisco. Members of the YWFC research team who  wrote the report, and who experienced juvenile incarceration themselves, recently spoke with Teen Vogue about how adults in the juvenile delinquency, probation and education systems ignored the root cause of their needs and how the thread of poverty ties together the experiences of too many system-impacted young people. Teen Vogue. 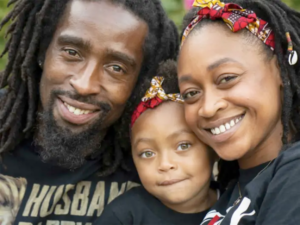 “Every single time we dismantle structural racism, we’re saving a Black mother’s life and we are saving a Black baby’s life. Our lives matter.” Five Bay Area counties came together to launch #DeliverBirthJustice, a campaign to raise awareness around how racism is affecting, even killing, Black moms and their babies, and to wipe out disparities related to infant deaths. Local News Matters.

YR Media looks at how institutionalized racism and state violence against Black people in Oakland inspired the Black Organizing Project to take action, organize around a vision for a brighter, safer future for Oakland communities and the major victories they have won for the community along the way, in this report. 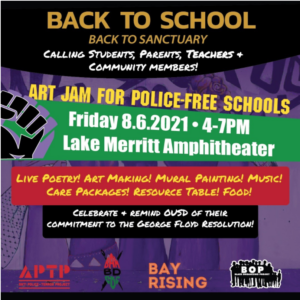 The Black Organizing Project, Bay Rising, Anti Police-Terror Project and more community partners hosted a “Back to School, Back to Sanctuary” Art Jam for Police Free Schools in OUSD at the Lake Merritt Amphitheater. The event featured live poetry performance, art making, music, care packages for OUSD students starting school on August 9, food and a resource table with know-your-rights materials about the changes implemented on OUSD campuses since the Board voted to eliminate the Oakland Schools Police Department.