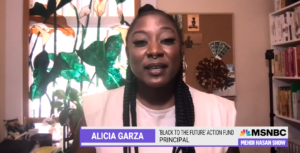 “Reproductive justice is racial justice. It is youth justice.” Monique W. Morris, president and CEO of Grantmakers for Girls of Color wrote about how young people of color who already experience disproportionately high levels of surveillance and monitoring by the criminal justice system face an even greater risk without equal access to safe and legal abortions. The Grio.

Since March 2020, there have been more than 11,000 hate incidents against Asian American and Pacific Islander communities in the United States. Stop AAPI Hate co-founders Cynthia Choi and Manju Kulkarni joined State Senator David Min and The San Diego Union-Tribune Editorial Board on Tuesday to discuss SB 1161, which would require California’s 10 largest public transit agencies to study the problem and form a plan to curb it, and speak to some of the experiences of the AAPI  community during a troubled time. SD-UT San Diego News Fix. 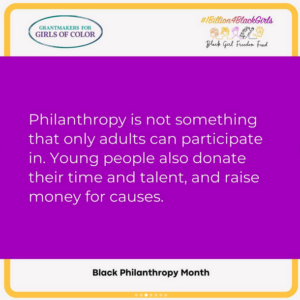 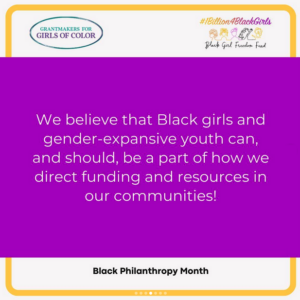 When you think of a philanthropist, what do you imagine? Anyone can be a philanthropist and help improve the lives of others with their time, talent and resources. Grantmakers for Girls of Color breaks down the definition of who can be a philanthropist, and calls on all people to get involved in philanthropy through their #1BILLION4BLACKGIRLS campaign to invest in the dreams, power, and joy of Black girls, femmes and gender-expansive youth. More on Instagram @g4gc_org

Alicia Garza, founder and principal of the Black Futures Lab and Black to the Future Action Fund joined New York Times columnist Charles Blow to discuss how the victories the Biden Administration has secured have “come to fruition because they have been pushed for by powerful social movements in this country” led by Black people. She also discusses how the Democratic Party must engage Black voters all the time, not just for the midterms, a sentiment backed by findings from Black Futures Lab’s year-long Temperature Check Polls. MSNBC.

“What I realized over the years is the thing they appreciated most about it was the community, was this feeling. Because we basically told them, you’re worthy. It was actually the space where they could just show up as they are, be valued for who they are, and told that they’re worthy and powerful as they are.” Diana Hwang, Founder and Executive Director of Asian American Women’s Political Initiative, spoke with Nonprofit Quarterly about her long time experience organizing for the AAPI community and challenging all-too common narratives about this diverse community. NPQ.

Why did the very popular Child Tax Credit (CTC) expansion fail in the Senate? Why has the  Commission to Study and Develop Reparation Proposals for African Americans Act failed to ever reach the floor for a vote since it was introduced in 1989? A powerful new essay from Nonprofit Quarterly points to the root of decisions around economic policies: anti-Blackness. NPQ.